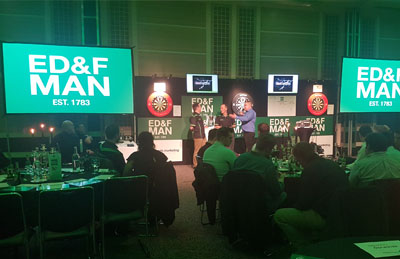 Darts icons Phil 'the Power' Taylor and James ‘The Machine’ Wade helped to raise £42,000 for charity when they squared off at ED&F Man’s second annual celebrity darts tournament on February 19th.

Over 200 ED&F Man staff and guests gathered at the Grange Hotel in central London for the event, arranged by Richard’s colleagues. Grant Howard, part of the team that organised the event, summed up the evening: “What a top night! Once again there was a great turnout from ED&F Man staff and from the four charities. Phil, James, Lee and Graeme were on top form and went out of their way for photos and autographs.”

The fundraising total of £21,000 was matched by Charico, ED&F Man’s charity committee, raising it to a grand total of £42,000, which was split between four charities: